So, what can Brother toner refill kits do for you?

Brief history of Brother cartridges and the refill kit fight back 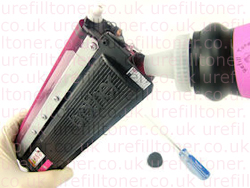 2012 - the HL-3040CN "unplug and pour" refill. Finally, a Brother colour laser printer the world could get on board with.

A toner refill kit gives you everything you need

A toner refill kit should give you everything you need to get the job done. Right: first time.

Have you got a number 2 Phillips Head screwdriver to hand right now? Some silicon glue? Or some 50mm tape?

Depending on which printer you're refilling, some, all or none of the above might be needed.

Our Brother refill kits won't leave you scrambling around in drawers for random bric-a-brac when you're desperate to get printing again.

You'll get everything you need to get the job done. Right: first time.

Based on how we did it ourselves

Do you want to re-invent the wheel? No. Save that for the management "team building" workshop, right?

We work with Brother laser printers as they're released and refill them ourselves first. Our refill kit enables you to do it how we did it.

We're not imagining how it could be done or recycling second hand tips from someone else's forum.

Includes close-ups of resetting the "thingamabob"

Guides you round pitfalls and disappointment

In reality, a successful refill of your Brother cartridge normally involves at least one "make or break" step. Examples we've seen over the last decade include:

Maybe not all of these apply to your printer. But at least one of them applies to refilling all Brother laser printers released in the last few years.

Really, they're no big deal. But someone has to get out in front of them and sort them out. Otherwise, you'll have put more toner powder in your cartridge, but your refill will still hit a reef.

Brother's tag line is "At your side". Were they at your side when they added reset wheels to their cartridges? Did that help you exercise consumer choice or your right to re-use your own resources?

Unless you're a big shareholder in Brother, will your voice be heard? Of course not! So vote with your feet. Stroll over to the rebel camp and breathe that sweet air of freedom. U Refill Toner: a thorn in their side