The antidote to laser printers

Find your refill
for use in:

We'd never compare a bunch of Brummies messing around with laser printers to the late, great Steve Jobs of Apple. But one of the many things he proved about business was the power of Vision.

Gazing much further afield than our next toner particle, we're out to gain an overwhelming consensus that do-it-yourself laser printer toner refills, if properly researched and implemented, have a significant role to play in helping the world print.

And why would printer manufacturers ever make a printer that was easy to refill? Easy. If they were scared no one would buy them otherwise. 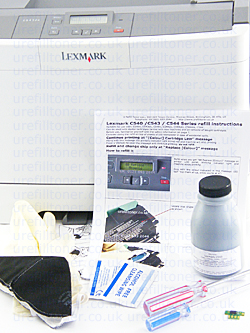 A successful refill revolution needs the right weapon : the dedicated Starter Kit. Researched and developed by printing with the laser printer in question.

Going far beyond a "cheap bottle of toner", over the last 20 years we've set up a permanent "rebel camp" of savvy people, smart resources and tested technology to serve as the business world's alternative to original brand laser printer supplies.

We invented "do-it-yourself" toner refills in 1992. Re-invented them in 1996 with "melt and pour". And pulled another rabbit from the hat in 2002 with "unplug and pour" for Samsung mono cartridges.

Only one company has been able to use the gift of first-mover advantage to marshal the resources needed to keep getting it right: first time. And only one company has the passion, resolve and the test lab to run systematic, printer by printer research into refilling new laser printers.

Our dedicated Starter Kits are developed through actually buying each new laser printer model and working with it. Can any other approach hope to generate consistently successful refill experiences? And will anything but a successful refill rebellion force the likes of HP or Samsung to listen?

So rev up your Harley Davidson. Take a ride over to our side and breathe the air in the Outlaw camp. We've been waiting for you. So have your fellow business-owners. So has the planet.